For the seasoned Counter Strike fans amongst us, you’ll remember the days when it was just straight up Counter Strike. Now it’s Counter Strike Global Offence, typically shortened to CS:GO. Counter Strike was originally launched in 1999, yep that long ago! If you’re a recent fan or you’re following games for betting reasons we’re pretty sure that words come up that you are just too embarrassed to ask, “WHAT DOES THAT EVEN MEAN?”. Well that stops now. Read our glossary and you’ll be right up to date with everything CS:GO.

When a player single handedly kills all members of the opposing team.

Repeatedly pressing keys A (walk left) and D (walk right) in a zig-zag motion to escape an opponent.

Abbreviation for ‘Aiming Down Sights’ which means to use the scope of a weapon to search for enemies or scout out the area. Weapons like AUG/Ballpup or the Krieg 552 have scopes.

Abbreviation for ‘Away From Keyboard’. Players use this term to let their teammates know that they won’t be in the game for a while.

A game hack which makes the user automatically aim at opponents; usually in the head for a one-hit kill. Also known as ‘triggerbot’.

When a team knows that their opponents are going eco, they go ‘anti-eco’ and spend a lot of money on the best guns and equipment in order to beat them.

A shortened term for semi-automatic or automatic sniper rifles likes G3SG1 or Scar-20.

When a player jumps or steps on their teammates to reach a higher location in the game.

Sometimes when the game gets a patch or updated, weapons will be given a ‘buffed’ status. This means that they are more powerful than previously. Buffed is the opposite of nerfed.

Jumping repeatedly instead of running in order to move faster.

Firing small bursts of shots to improve accuracy instead of shooting non-stop.

Maps have specific callouts which means that when the team shouts a callout it can identify where their enemies are currently located. A callout could also refer to a meet-up point for players. In all maps there is always a callout where the players spawn, namely ‘CT Spawn’ for Counter Terrorists and ‘T Spawn’ for the Terrorists’.

If a team has a big advantage over their opposition but then give away the lead as a result of suddenly getting caught up in statistics, it is called choking.

When an outnumbered player wins the round on his own the situation is commonly referred to as a clutch.

Abbreviation of competitive: The most-played game mode in the game.

The amount of time that a player is banned from playing competitively is often referred to as the cooldown period. Players can be made to cooldown due to leaving a match, getting votekicked too often or doing too much teamdamage.

When two players of the same team position themselves at different angles to cover the opposing team’s firing lines. The minimum number of players to form a crossfire is two and they typically make a cross line when firing, hence the term crossfire.

A jump that starts with crouching in order to jump higher.

Short for console variable which is a text-based command within the game. The command changes the environment or gameplay conditions like the gravity or the total time per round.

Short for the Desert Eagle, a pistol in the game.

Originates from the ‘dink’ sound which is made when a player successfully makes a headshot in the game.

This is the term used when a player kills two opponents in quick succession.

The term refers to a player crouching right after shooting the enemy in anticipation of them shooting back. The stance is used for protection as it decreases the chances of being shot in the head.

The nick name for the dual wielding pistols Dual Berettas.

Spending very little or no money in a round to be financially economical.

The term for the first kill of a round. Frag also means kill in CS:GO.

The kills that a player makes when the opposing team retreats are known as exit frags.

Going behind the enemy lines to attack them in the back. Typically results in lots of kills and shifting the round advantage.

When a player suddenly moves his scope in different directions whilst quickly shooting any opponents that get in the crossfire.

When a team, currently low in cash, manages to purchase a mix of basic pistols combined with armor or grenades. This strategy can trick an opposing team that thinks they are going to have an ‘eco’ round.

The amount of frames (images) per second. If you have a high framerate, animations run smoothly.

”Good half”. Said during half-time when players switch sides.

”Good luck, have fun”. Often said when a match starts.

“Good job”. Often said after a winning round.

Shooting a player in the head, usually resulting in a one-hit kill regardless of the weapon used.

Hit points equals the amount of health you have left. Players die once their HP reaches 0.

Shooting and jumping at the same time.

When a player is about to kill someone but one of their team mates does it first.

When two or more players engage in battle with no other weapons apart from knives. Often done in a 1v1 situation.

Abbreviation of ”kill/death ratio”. This is the amount of kills per player divided by their deaths.

Another name for the Terrorist assault rifle SG 553. This is one of the few guns capable of performing headshots no matter how far away an opposing player is.

Delay in a player’s actions due to bad internet connection/server.

Another word for damaged.

A jumping technique whereby players make small left to right movements in mid-air. It allows the player to jump further.

MM stands for matchmaking. This is the system used to create matches by pairing players of similar rank. MM reduces the chances of new players being paired against professional players and vice versa.

Another name for the molotov and the incendiary grenade.

Another word for the HE (high explosive) grenade.

When a weapon is nerfed, it means that the creator of the game (Valve in this case) weakens a weapon that used to be too powerful.

When a Counter Terrorist player defuses a bomb that doesn’t kill any of the Terrorists and no-one notices the bomb being defused.

Firing off a shot with a sniper without using the scope.

Someone who is new to the game and isn’t very good. All of these terms are considered insults.

Abbreviation for ”overpowered”, which means that a weapon is excessively powerful.

Quickly checking if any enemies are in the area.

When both teams are playing defensively and one player successfully kills an opponent – gaining advantage – the winning kill is known as the pick.

Describes how good a player’s internet connection is. High ping means a lot of lag and low ping means not so much lag.

This usually refers to the first round of each match. In these rounds no player has enough money to buy a weapon other than a pistol, hence the name.

Flashbang that explodes before the enemy can look away.

When a player shoots an area without knowing whether the enemy is there or not.

When a player or team attacks or pushes the opposing team’s position.

When a player kills four enemies in quick succession.

Firing a shot immediately after using a sniper rifle’s scope.

While firing a weapon on full automatic, the recoil will make the targeting reticle move in a specific path or pattern rather than stay in center. This pattern is referred to as the Recoil pattern. Most weapons use the following recoil pattern: up, slightly left, right and left.

When an individual or team aggressively plays the opposing team with minimum strategic or stealth play in order to quickly get kills and win.

A change of strategy or going to another area of the map than originally planned. For example, if the original plan was to go bombsite A but the plan doesn’t work out a player would rotate to bombsite B.

A tactic typically carried out by a lone player playing against a team. Instead of trying to win a difficult situation they will hide somewhere to survive and keep your weapon.

Another word for the SSG 08 sniper rifle.

Creating a second account with a lower rank/deranking in order to play and win against lower-ranked players.

When a player is heavily damaged they are tagged.

A hack that allows a player to see through walls. Also referred to as ”wh”.

Have we missed anything? Let us know in the comments section and we’ll update our glossary.

Are SoStronk about to make CS:GO blow up in Asia? 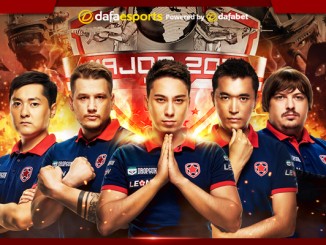 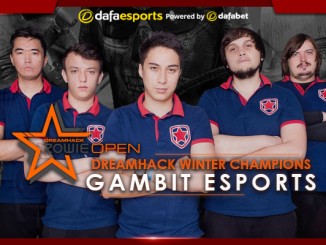 Gambit Gaming: the winners of the Winter DreamHack