eSports Update – 10 Things You May Have Missed!

This week we kick off with some big news from Team Fnatic who are set to launch their new range of peripherals dubbed ‘Fnatic Gear’, as they look to bring gamers professional solutions from the professionals themselves.

Still on Fnatic we were disappointed to hear that Fnatic are withdrawing their LoL team from the IEM X San Jose due to the ill health of one of the players. Thorin has written a great preview of the event for us, albeit before the news broke of Fnatic withdrawing.

eSports is certainly full of highs and lows. and another low this week is that one of the world’s foremost organisations, the China based Team DK, have disbanded leaving their LoL, Dota 2 and HotS teams without a home.

CS:GO may be slowly rising in popularity in Asia, with well known LoL organisation Team MVP announcing that they’re adding a CS:GO team to their squad. But its still predominantly a European game as IGN and CoCo-Cola report.

Lastly we leave you with an accidental upload from ESL which has gone viral, which see’s popular host ReDeYe being targeted. A bit uncalled for if you ask us!

“We’ve been in Esports for a long time. From the early days of dial up fun, to Xpeke backdooring his way to victory in League of Legends at IEM Katowice, to today with over 27M people watching our CS:GO boys victory at ESL Cologne. After 11 years of blood, sweat, and broken gear… we know what makes great Esports hardware. No flashy green lights will get you a Pentakill. No fan on a mouse will help you hit a headshot. Esports gear is about simplicity, comfort, and reliability – it’s exactly what you need to perform and nothing else.

2. ONE OF THE WORLD’S BIGGEST ESPORTS ORGANIZATIONS HAS DISBANDED

“One of the biggest multigaming esports franchises on the planet shut its doors today. Team DK has dissolved, leaving teams in Dota 2, League of Legends,Heroes of the Storm and more without a home.

The Chinese organization, founded in 2010, quickly grew to become a powerhouse in the scene, picking up top teams in each of those games. But it’s closing their doors after struggling to keep up in the intense esports scene. The team’s CEO, Teng “Andy” Zhao, offered a statement about the move on Chinese social media platform Weibo, translated here by Team Liquid user Carnivorous Sheep.”

3. COMPLEXITY GAMING IS IN TALKS WITH TF2 PLAYERS FOR ITS OVERWATCH TEAM

“It’s been three weeks since Blizzard’s newest franchise went into beta and already one of the oldest American esports organizations is planning to build a team in the game.

The organization already has a footprint in multiple games, with teams in Call of Duty, Counter-Strike: Global Offensive, Dota 2, Heroes of Newerth and Heroes of the Storm, as well as players in Hearthstone and StarCraft 2.

Blizzard Entertainment has yet to provide details on how it plans to organize the Overwatch esports scene, and it’s still trying to figure out the structure for some of its existing games.”

4. WHY EUROPEANS DOMINATE AT CS:GO – ESPORTS WEEKLY WITH COCA-COLA

“It looks like a good year for the underdogs as team Unknown, hailing from Peru, kicked out Newbee in the lower bracket.

The former The International champion was not able to secure a win and is eliminated from the tournament. Meahwhile the Peruvians will advance for the second round of the playoffs where they will fight against another Chinese powerhouse, LGD. LGD fell on the lower brackets after they lost to CDEC. European team, Vega Squadron is the second team to make their way in the lower brackets after their loss to Evil Geniuses.”

“World renown mid laner, Lee “Faker” Sang-hyeok, one of two 2-time League of Legends World Champions, has resigned with SK Telecom T1 for the 2016 season. No information has been revealed about the details of the contract, but Faker has decided to remain in Korea to attempt a 3-peat with SK Telecom T1. The organization made it clear that they will not let Faker leave the team and will continue to “capture Faker’s Heart.” Fans were worried that he may have left to a join a Chinese team offering him better salary.”

“Taking place from November 21st to 22nd in California, IEM X San Jose looks to be one of the most competitive and exciting international tournaments outside of Riot’s own in many years.  All six of the invited teams would be top 20 ranked teams in the world and five of them were in attendance at the Season 5 World Championship.”

8. MICHU STEPS IN FOR VIRTUS IN SAN JOSE

“Virtus.pro have announced that they will field CSGL talent Michał “MICHU” Müller as a stand-in at IEM San Jose.

The former Gamers2 player will step into the shoes of Janusz “Snax” Pogorzelski, who will stay at home due to a problem with his right eye, team coach Jakub “kuben” Gurczynski revealed on Facebook.

Pogorzelski will be rested for the event but is expected to make a full recovery in time for the FACEIT League Stage 3 finals, in Jönköping, from November 26-28.”

9. GUY FREAKS OUT AT REDEYE (AKA, THE TORONTO INCIDENT )

Earlier today a report from Inven.co.kr stated that one of the most successful South Korean esports organizations is looking to venture into CS:GO after fielding players in StarCraft II, League of Legends and DotA 2 for the past few years, among other games.”

eSports Update – 10 things you may have missed this week. 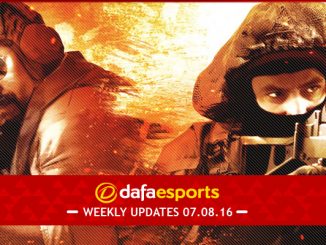 eSports Update – 10 Things you may have missed!